Bringing magic into the kitchen: heat and steam combined

Published on 3. July 2020 by V-ZUG Redaktion - Sandra in Gourmet

A Combi-Steamer function opens up a myriad of possibilities and produces astonishing results. Reto Stefania from the Gourmet Academy explains how “hot air with steaming” makes cooking easier and produces better results. 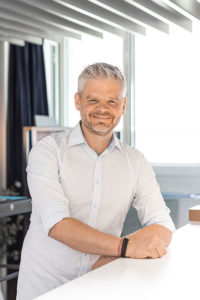 Many of the appliances we use every day without a second thought can actually do far more than we realize, and that goes for kitchen appliances too. For example, the Combi-Steamer by V-ZUG has numerous programmes and functions that make cooking easier and produce better results. Reto Stefania from the Gourmet Academy says that Combi-Steamers even have a sort of “secret weapon” in their arsenal of useful functions: “Hot air with steaming is a function that is often overlooked. Lots of people don’t even really know what it can be used for.”

Reto is a trained chef and confectioner, has lots of experience working in many different countries, and knows a thing or two about ovens. In his role for V-ZUG he travels around the world to special events where he demonstrates the different ways in which the various cooking modes can be used. “At the Salone del Mobile in Milan, for example, we made savoury egg custard Royale. We took the tops off, scooped them out and then refilled them with the Royale mixture. By using hot air with steaming we were able to cook all 90 eggs at 85 degrees at the same time, still in the egg boxes,” the 46-year-old chef tells us.

The advantages of combining hot air and steam are that this creates a really intense heat which is then distributed evenly throughout the whole oven. This means that meat, vegetables, and even egg custard cook more quickly and more evenly. “Just yesterday I made potatoes and chicken wings in my steamer at home. It’s pretty quick thanks to the moist hot air, and it turns out brilliantly.” Reto’s tip: if you prefer your meal to be crisp, simply switch the steam off ten or twenty minutes before it finishes cooking. The dry heat crisps things like chicken up perfectly. 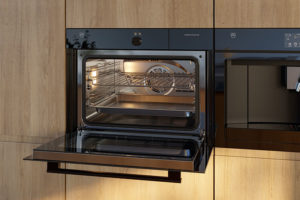 Reto’s favourite dish, however, is surprisingly easy to prepare: “I take a whole cauliflower with its leaves still on as they’re particularly tasty, cut a little bit off the bottom so it sits well in the tray, and then roast it without any seasoning for 40 minutes at 170 degrees using the hot air with steaming function.” It always cooks perfectly, he continues, and then everyone can add the seasoning they prefer: a tahini and yoghurt dressing, a herb pesto, or simply just salt, pepper and good-quality olive oil. It’s a great simple dish for family meals, Reto says, and it tastes so good that his seven-year-old daughter will happily go without any meat.

In terms of taste, the chef explains, with this function the combination of heat and moisture at higher temperatures leads to a slight loss of water, meaning the flavour becomes more concentrated, which doesn’t happen when you cook vegetables using steam only. Finally, the Gourmet Academy expert recommends playing around a little with the hot air with steaming function: “It’s best to just try it out, that way you’ll discover it can do lots of things you hadn’t expected.”