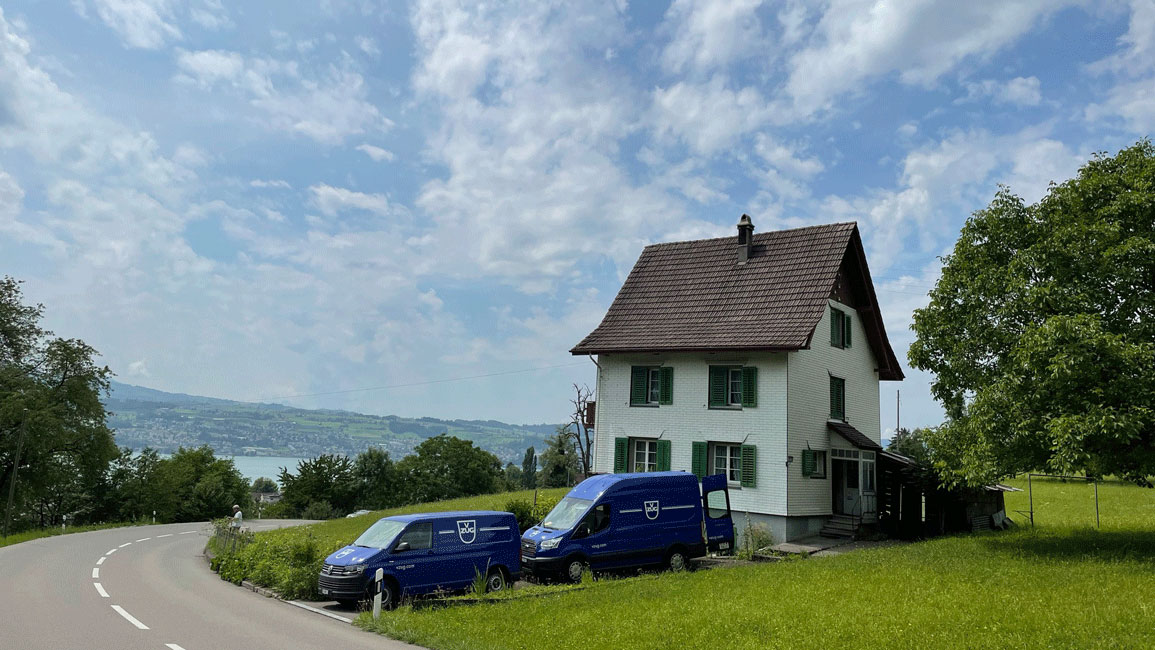 A piece of history is returning to Zug

For over 100 years, V-ZUG has been synonymous with durable, high-quality household appliances. Yet even we were sceptical that our Unimatic and Adora appliances could last for 60 years. The washing machine and tumble dryer in Heinz Müller’s parents’ home have convinced us otherwise. After six decades of use, the two V-ZUG appliances are being returned to the place they were made.

Today is a special day for Robin Tiefenthaler from Full Service and his colleagues. The three-man team have a very special task to carry out in Stäfa in the canton of Zurich. Or more precisely, in Heinz Müller’s idyllically situated family home. “We sometimes come across washing machines from the 1980s, but I’ve never seen an order involving the model we have to remove today before”, says Tiefenthaler.

“We sometimes come across washing machines from the 1980s, but I’ve never seen an order involving the model we have to remove today before”

The house, which was built in 1931, is surrounded by a large meadow and has a magnificent view over Lake Zurich. Heinz Müller grew up here with his brothers and sisters. While the large house had a lot of space, it was also hard work. And washing machines? They were far from an everyday appliance back then. “We first bought a Unimatic and an Adora in the 1960s, and my mother was still using them up until last year”, says Heinz Müller. It wasn’t by chance that the family opted for V-ZUG machines. “My godfather was working in field sales for V-ZUG at the time, so these washing machines were the obvious choice for us”, he remembers. The two machines meant a lot less work for his mother. “Having six children meant a lot of washing”, he laughs, adding: “I remember how we used to go into the laundry room with our mother. We used to be fascinated by looking through the glass of the door and watching the washing spin.”

But after around 60 years, the machines have finally served their time. “Removing such an old model will be quite a challenge. We need to check at every step how we can carefully take out the machine”, says Dennis Vitaliano from Full Service. Service Technician Dominik Rogenmoser adds: “New machines are simply placed in the room and connected. The old ones are far heavier and are also secured with large bolts.” And as if that didn’t require enough muscle power, a thick layer of rust has also built up over six decades. Loosening the bolts with a simple pair of pliers therefore seems impossible. The solution? A milling machine has to be brought in. After a little more than one hour, the washing machine and dryer can be loaded into the V-ZUG service van. What will happen to them now? They are being taken to the V-ZUG Museum at head office. “They’re moving into their retirement home”, jokes Heinz Müller. “They can enjoy their twilight years there and be marvelled at for their many years of service.”

The history of V-ZUG

With care and precision to the Unimatic