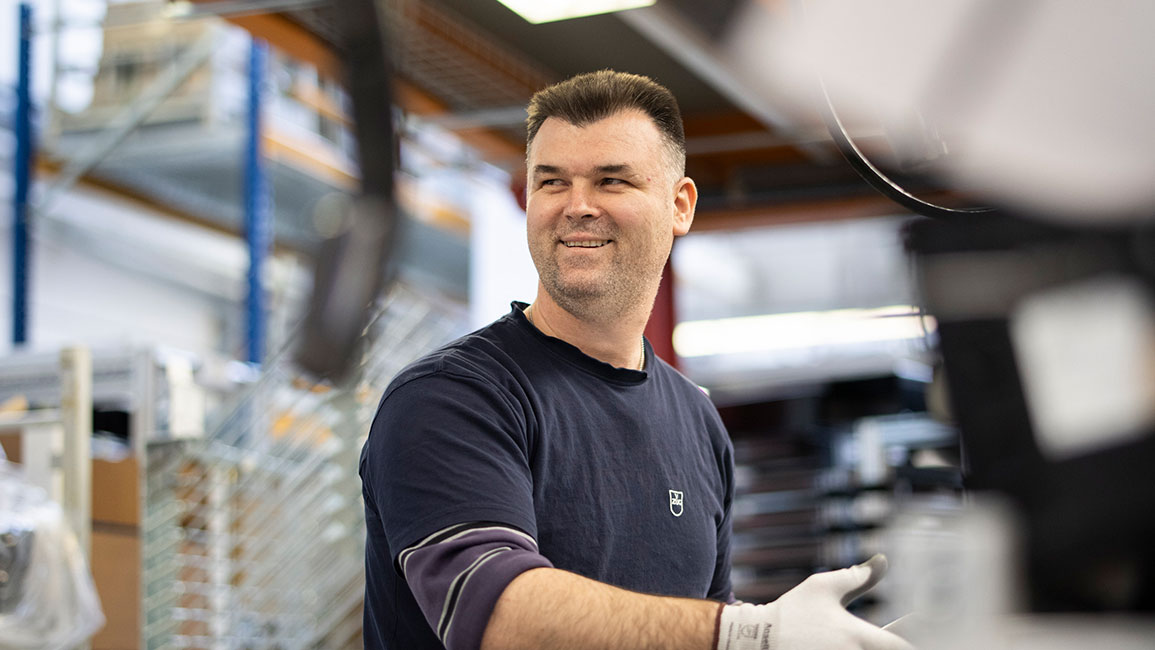 “It’s like when you’re buying a car: you need to check the paintwork and glass extremely carefully.”

At precisely half past six every morning, Shpresim Balazi stands on the ground floor of the factory hall at the Zug site and puts on his gloves. His workstation is on the assembly line for steam cookers and ovens where, together with a colleague, he manually installs doors into the appliances.

The modern assembly plant with smart assistance systems and a high degree of automation technology was newly designed and installed for producing the Excellence Line. Thanks to the platform concept, Advanced Line appliances can also use this production line. For the employees in pre-assembly and assembly, it’s a whole new working environment. They were all able to contribute their ideas at the planning stage to make it safe, ergonomic and efficient for all. Thanks to his many years of experience, Shpresim Balazi was also able to explain what equipment he needed and what would make his work easier. 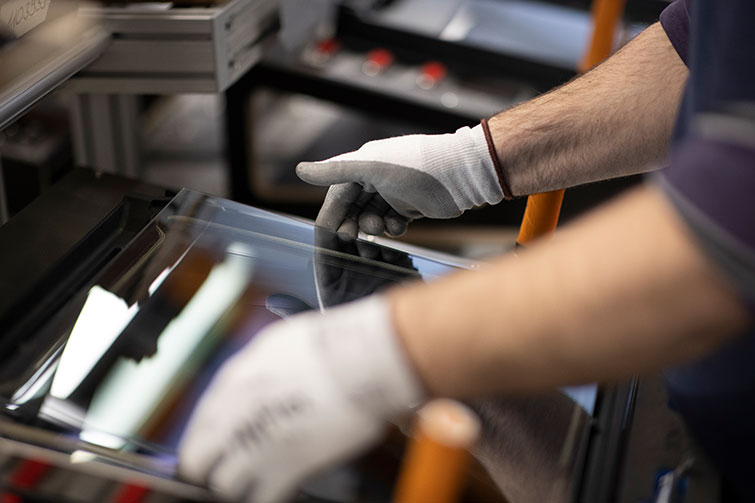 Born in North Macedonia, Shpresim Balazi moved to Switzerland when he was ten. He has been working for V-ZUG AG for eight years now. “Yeah, time flies”, he says with a smile. To begin with, he worked on the production line for washing machines and tumble dryers, installing the bases. He then worked in pre-assembly. He has recently started installing the doors on steam cookers and ovens.

1 February 2021 marked the official start date for the production of the Excellence Line. “It was a little hectic in the beginning”, he remembers. “First we had to see where the right components were, and which ones we were installing where. It was very interesting to see the very first finished appliance.” For the doors, the assemblers work in pairs. The first production step involves preparing the appliance – springs and screws are attached and handles are screwed on. Then the appliance is returned to the line and the second step involves mounting the glass and seals.

The experienced assemblers use a digital display system to see which appliance model from which product line is approaching their assembly station. Production varies widely. Ovens and steam cookers, Excellence Line and Advanced Line are all built to order. Sometimes the models keep changing; sometimes several of the same type follow one another. The door assemblers need to think quickly and flexibly and prepare everything properly in line with the display, then install the doors and send the appliance off for the final inspection. 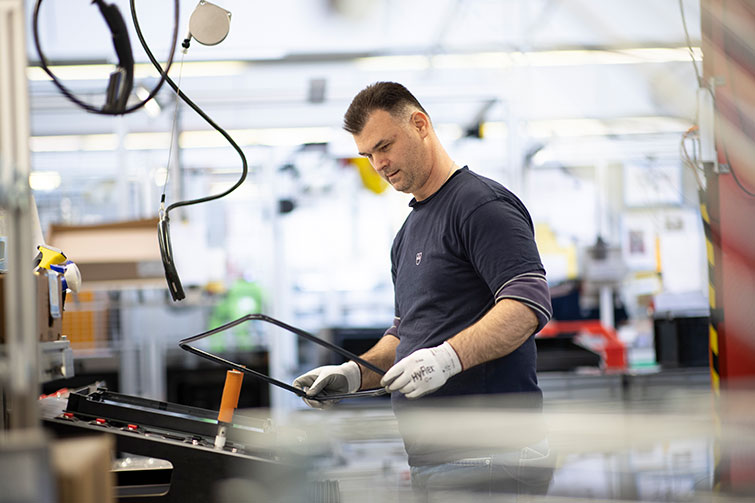 Attention to detail defines the quality

Why are the appliance doors installed manually and not in an automated process? Door assembly itself is quite simple: clamp the hinges into the opening and pull the brackets forwards. “However, you have to be very observant and pay attention to every detail. The glass must not have any scratches, stains or marks – this is what defines the quality”, explains Shpresim Balazi. “It’s like when you’re buying a car: you need to check the paintwork and glass extremely carefully.” This process cannot be done on an automated line. After all, at V-ZUG, Swiss Made is a clear promise of quality.

Aside from which, not all of the doors in the various appliance models are the same. The double-glazed doors of the Excellence Line constitute the main difference. These premium doors consist of two pieces of glass – one outer and one inner – with a seal in between. Handle-free doors with AutoDoor are also new. “You certainly need to be strong to install them”, says the assembler. “But a good eye for detail and care are most important when it comes to quality control.” He wears work gloves to protect the mirrored glass from fingerprints, and also to make sure the glass doesn’t slip out of his grasp.

The 42-year-old uses his hands at work, but enjoys kicking a ball around in his free time. He actively played football himself and then also coached juniors. But two years ago, he gave up his coaching role, as there was little time left for family at the weekend and alongside work. Shpresim Balazi lives with his wife and two children in Kriens.

He now has more time for them during the week, too. He works at V-ZUG during the day until four o’clock in the afternoon. He and his colleague install around 200 doors every day. But the capacity can and will be expanded. What makes him most happy or proud? “Everything!”, he replies, without hesitation. It’s a good feeling, knowing you’re helping customers to receive a great product.

In his language, the name “Shpresim” means “hope”. His own hopes are for “Health. a healthy, happy family.” The door assembler smiles. “And that I can continue to do a good job for a long time.”

“We have set up a whole new platform.”