Voltaire, Sforza and the flagship product of Lake Constance

V-ZUG has developed its very own fridge for the first time on Lake Constance – a project that took years. The ‘newbie’ has been named the CombiCooler V4000, and is the pride and joy of the team led by project manager Fabian Fuchs. A visit to Arbon.

As a boy, he wanted to be a footballer, says Fabian Fuchs. But a torn cruciate ligament and fractured fibula put paid to his dream of a profession on the pitch. He’ll be thirty next year and, instead of kicking balls into a goal, he’s developing fridges. Fuchs is a New Developments Project Manager at V-ZUG Cooling Technology Ltd. Seven years ago, V-ZUG took over the refrigerator business of Arbonia-Forster-Holding AG and repositioned itself in cooling technology. Since then, V-ZUG has been developing its own fridges in Arbon. The first of these new products is the CombiCooler V4000, which was launched onto the market a year ago. 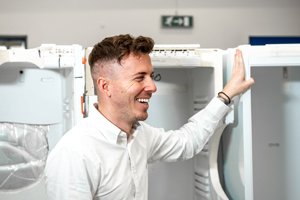 Fabian Fuchs’ curriculum vitae mentions the philosopher Voltaire. “Knowing many languages means having many keys to one lock,” he is reputed to have said. Fuchs has five such keys – in addition to German, his native language, these include English, Croatian, Spanish and French. And even though he doesn’t need all of these in the town of Arbon on the shores of Lake Constance, he appreciates feeling at home in several languages. After all, everyone comes to talk to him: draughtsmen, engineers and designers. Fuchs has to understand their ‘languages’ and guide them towards a shared goal. “Discussions between draughtsmen and designers are a prime example of this,” he declares. Looking good is important, but fridges have to be profitable too. And this can sometimes be rather tricky, particularly if the designer has a particular agenda. “We want to sell kitchens from a single source,” explains Fuchs. Because designers are responsible for several appliances, they often contribute a different viewpoint. “But we work hand in hand,” he stresses, “over a period of several years.”

Take the V4000, for example – the first refrigerator that V-ZUG has developed entirely from scratch. “The V4000 is a flagship product,” declares Fabian Fuchs proudly. A product whose sales are exceeding expectations. At the start of a new development, the market is examined: where is the competition, what do customers expect, how can we differentiate ourselves? This results in a requirements specification – what does the appliance have to do, how does it fit in with corporate strategy? First you make a design model with no functionality, followed by working models and a prototype. Three copies of the prototype are tested for several months in private homes, in what are called ‘customer panels’. Then there’s the pre-production run and finally the pilot run of the market-ready product. The development process is iterative, meaning it runs in loops. You present a provisional version, scrutinize it, improve it more, and keep repeating this until you get the desired result. “In the case of the CombiCooler, we started from scratch,” explains Fuchs. He personally likes the quality of the appliance; for example its smoked glass drawers. First of all, they assemble the technical requirements, in other words how the refrigerant circuit is supposed to work, the interior fittings and the casing. These requirements are used to create the CAD drawings. “We work as a core team,” says Fuchs. An inter-disciplinary team with representatives from all areas of expertise. A flat organizational structure that facilitates new approaches. And they keep in constant touch with their colleagues in Zug.

V-ZUG remains true to itself
What will the fridge of the future look like? Perhaps like the ‘bio robot refrigerator’, where food is pressed into a futuristic-looking green gel to keep it fresh? “Of course such studies are fascinating,” says Fabian Fuchs. But he doesn’t see any move towards such solutions. What everyone is talking about at the moment is the new energy label that is being introduced in spring 2021. Push-to-open is also fashionable, allowing you to open the fridge door with just one fingertip. After a brief pause for thought, he says “In any case, we will remain true to ourselves”. He is unable to reveal any more than that. Someone who, despite a torn cruciate ligament and fractured fibula, has become a star player just like Swiss footballer Ciriaco Sforza – someone who supports his teammates. Someone who is the focal point for his team, but who performs not on a pitch but as part of the V-ZUG squad. 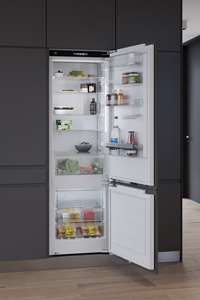 V-ZUG launches the first refrigerator of its very own
The CombiCooler V4000 is the first fridge that V-ZUG has developed itself from A to Z. Together with three other appliances, it makes up the new CombiCooler generation, featuring a fully integrated design. Modern LED lighting provides the best possible overview of the interior and, thanks to a Wi-Fi module, it is the first V-ZUG fridge that can be integrated into a digital home. Its features include:

Regeneration: reheating food easily with no loss of quality

Bringing magic into the kitchen: heat and steam combined