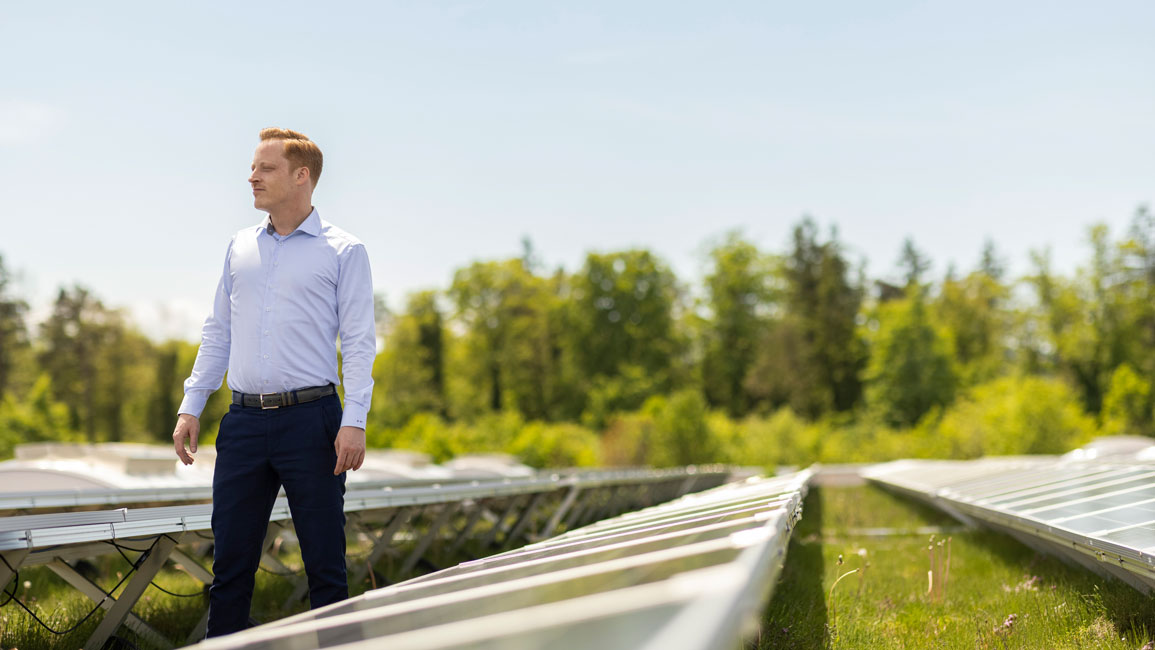 Published on 1. September 2021 by V-ZUG Redaktion - Aline in Swiss Made

Björn Weiss coordinates plans, dates and costs and communicates with architects, the authorities and site workers. The project manager has complete oversight of the V-ZUG Kühltechnik AG new build, as well as a keen eye for detail.

In Sulgen, no-one gets past Björn Weiss. The new build project manager has set up his temporary office in what will be the reception area. It’s the hub of the building, and offers the 35-year-old a comprehensive overview of all visitors as well as the entire construction project, a 20,000 m2 production facility with office space. “I really value the fact that the company has entrusted me with this role,” says Björn Weiss, who trained as a general mechanic and plant technician. He has been at V-ZUG Kühltechnik AG for six years, most recently in Industrial Engineering, and is doing a master’s degree in management alongside his work. 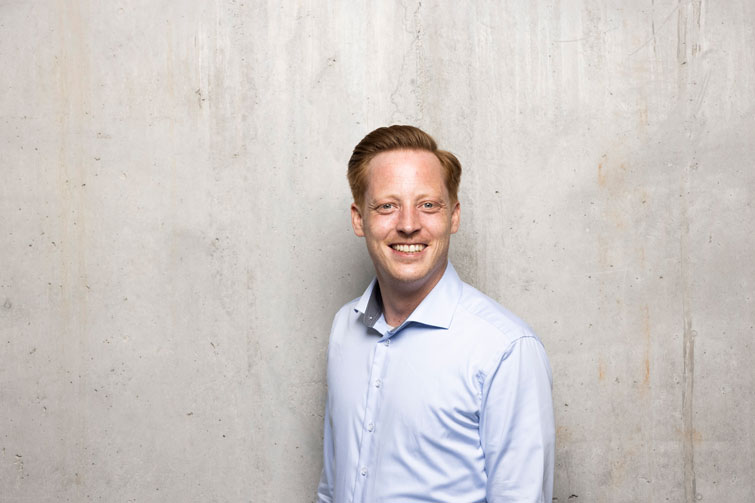 On the project manager’s desk are two large monitors, and he brings up a site plan on one of them. The production layout has been designed to fit the available area, a trapezoid with a narrow end: the production hall and warehouse are near the road entrance, the administration area at the back. “We’ve focused on short distances. Our priorities are an intelligent flow of traffic and an optimal value stream,” says Björn Weiss.
With just a few clicks he shows us on the second monitor what has been built on the greenfield site in just over two years: a time-lapse view of the Sulgen plant. The production facility was designed together with planners specializing in electrics, heating, climate control, ventilation, acoustics and statics to meet the company’s requirements. Architects, general contractors, various authorities, the municipality and the neighbours all played a part in getting the project off the ground. And Björn Weiss is responsible for joining up all the different strands. “Yes, I bring everyone together, I coordinate the interfaces and support our project managers,” he smiles. Needless to say his job also involves internal communication. “We asked ourselves: how do we want to work today, and how do we want to work tomorrow?” he says. To find the answer to this, he sought the opinions of the workers as well as the visions of the Management.

Healthy and flexible for the future

The vision of being flexible for the future was a driving force behind the new build. The company needs to keep up with the market and must be able to react quickly. As we take a tour through the large production hall, Björn Weiss points out all the ethernet sockets: “We’ve already ensured good network coverage. We’re prepared for any future move to a driverless transport system or other innovative technologies.” The hall itself is being constructed with new lightweight materials and insulation – it’s a modern building, being created with efficiency and precision. His father, a retired architect, has given his approval for the building, and Weiss is pleased to have received such praise from an expert. He’s swift to point out more details, including the individually controlled light switches and the doors for incoming and outgoing goods, kept separate to help with climate control. He also shows us the four large tanks and blocked off external tank for the various gaseous raw materials used for the polyurethane foam, all with run-off containment. “Our safety measures go above and beyond the cantonal specifications. We take workplace and environmental safety very seriously.”

“Our safety measures go above and beyond the cantonal specifications. We take workplace and environmental safety very seriously.”

Sustainability and leaving only a small carbon footprint is a declared objective of V-ZUG Kühltechnik AG. A photovoltaic plant on the roof of the production facility produces renewable electricity, while a groundwater heat pump system keeps the building temperate. There’s no air conditioning. Björn Weiss looks up at the ceiling: “We can pump water through the radiant ceiling panels to even out spikes in temperature,” he says. Additional gas heating is on hand if the temperature falls below zero. “We’ll have carbon-neutral production, but due to the need for gas heating during longer cold periods, we won’t be able to achieve this without offsetting.” Yet it’s clear that he’d prefer to not have to rely on offsetting to achieve this goal.

Managing a construction project at work has also inspired Björn Weiss to do some building work at home: he’s constructed an insulated smoking and maturing room in the loft of his home in Mauren, Thurgau. All because he loves making his own salami, sausages, bacon and dried ham. Once he’s chopped, cured and seasoned it all in his kitchen, he smokes it in his loft and hangs it to mature, sometimes for several months depending on the product.
In a similar way, there’s a little time and patience still required at the new production facility. Most of his colleagues won’t be relocating there until the end of 2021, although he’s already involving them in the journey from the existing plant in Arbon to Sulgen. He invites them to come on tours and discusses their workplace ideas with them. “We’ve built a new home for our company, and that makes me proud,” he says. What makes him happiest, though, is seeing that people are interested and looking forward to the new site. “We’re building here for us and our future,” he explains.
Once all parts of the Sulgen site are fully operational, his job will be done. For the coming year, though, you’re bound to come into contact with Björn Weiss if you’re at the new V-ZUG Kühltechnik AG site.

Sustainability in the V-ZUG