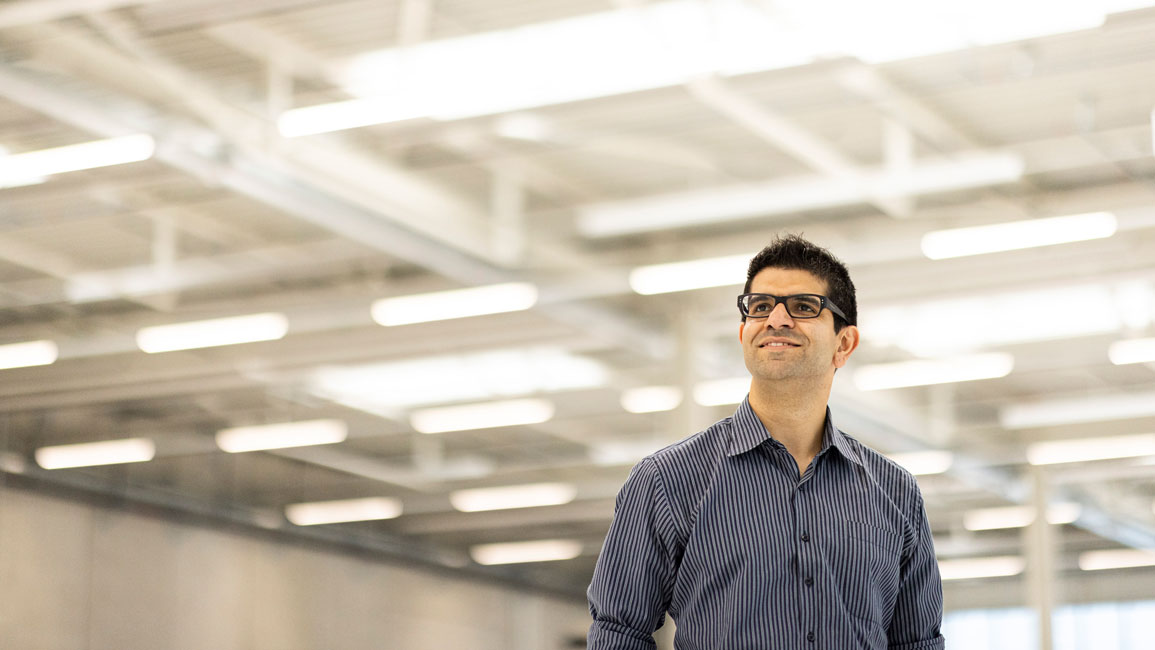 Published on 4. October 2021 by V-ZUG Redaktion - Aline in Swiss Made

In Sulgen, Daniel Minder is responsible for the fully automated high-bay warehouse and for final inspections of cooling appliances. In the process, the project manager relies on an unconventional storage technology solution.

ASRS, DTS, SAP, emulation. Daniel Minder is in his element when he’s talking about ASRS (automated storage and retrieval systems) and DTS (driverless transport systems). The 31-year-old is heading two strategically significant projects in Sulgen: without the high-bay warehouse, little would be produced in the new plant. And it would not be possible to test the cooling appliances without the final inspection.
The trained automation and mechanical engineer, who also holds an MBA degree, has been working at V-ZUG Kühltechnik AG for four years. “Our company has committed itself to “Swiss Made”. We wish to consolidate our knowledge regionally in Thurgau. I think the newly built production facility for cooling appliances for 150 employees is pretty unique for Switzerland as a manufacturing location. I can really identify with it”, says the industrial engineer, who lives in Goldach with his wife and two young daughters. 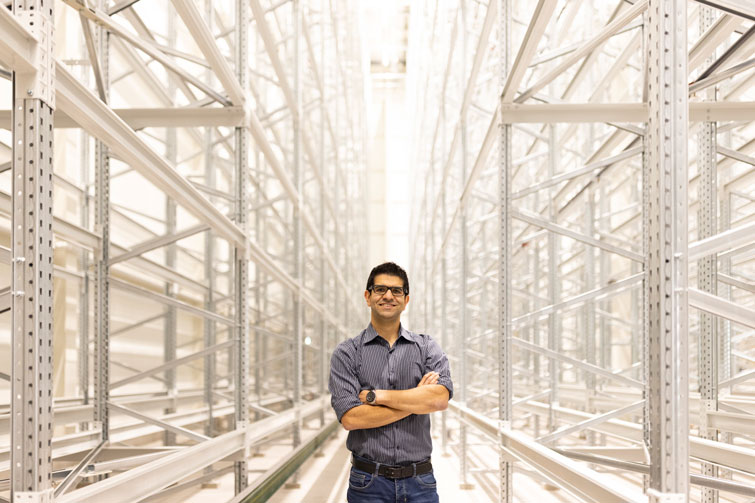 Under his project management, a fully automated high-bay warehouse for components for cooling appliances has been introduced in Sulgen: 16 metres high, with 4 aisles and a gross capacity of 4,500 pallets. When it came to storage technology, Daniel Minder chose an unconventional solution over a classic one: “Instead of four aisle-bound systems, we have just one curve-going automated storage and retrieval system,” he enthuses. The ASRS is a tall mast crane with a load handling attachment. It travels automatically along a rail through all of the aisles and picks up and sets down pallets. The warehouse is partially powered by renewable electricity from the large photovoltaic system on the factory hall roof.
The solution process for this special technology was long and challenging. But for the man from St. Gallen, this is also what makes the job so much fun: finding the best possible way from A to B. “I’m responsible for the route. This is what I live for!” For Sulgen, this means that he should utilize the volume of the warehouse to the maximum, while maintaining a fair cost to benefit ratio. He spent a long time calculating and evaluating various elements, such as the demand for pallets that go in and out every day, including peak values, their weights and dimensions, structural considerations of the building and theoretical modelling with conventional warehouse parameters, etc. He then drafted a concept for an SAP-controlled warehouse that matches the capacity of the company and is flexible for the future. The engineer brings up a 3D view on a screen. With the emulation – the warehouse simulation software – he can test the functioning in theory. Using his computer mouse, he travels along a conveyor system from the incoming goods to the picking zone and into the high-bay warehouse. This conveyor system serves as a buffer area. The pallets wait here until they are collected by the storage and retrieval system for storage. There is also a small buffer area for stock removal. With the A-B-C labelling of all materials, the “high runner” can be stored near the warehouse exit, significantly increasing warehouse capacity. Daniel Minder’s mouse continues its journey and bends around a curve in one of the aisles to show the routes that the storage and retrieval system takes.

“I’m responsible for the route. This is what I live for!”

Pressing ahead with an intelligent logistics concept

The high-bay warehouse is part of the new intelligent logistics concept in Sulgen. V-ZUG Kühltechnik AG is committed to optimum material and production flows in its new plant. “We’ve taken a huge leap forward”, says Daniel Minder. “Firstly, with the fully automated high-bay warehouse. Secondly, with the material supply for production, which is served by a pallet tugger train. And thirdly, with the overarching SAP system, which manages materials and production in its entirety.” His mouse once again hovers over a layout on the monitor and draws a loop to illustrate the production flow: from incoming goods to the warehouse, out into the hall for the production process, then into final inspection, on to the finished goods warehouse and finally to goods shipping.

The final testing of the cooling appliances, also known as 100% inspection, is another of the engineer’s projects. This final inspection of the cooling appliances is situated on a platform around 30 x 15 metres in size in the corner of the hall. The special thing about this is the driverless transport system, like a self-driving robot, he enthuses. It brings finished appliances to one of the 90 testing stations, where the cooling curve and the power consumption, among other things, are technically tested. The new refrigerator product line communicates via dedicated Wi-Fi to test the appliance using internal sensors and to load the latest software onto the appliance. After testing, the DTS collects the appliance and takes it for visual inspection by staff.
Until the construction of the new facility in Sulgen is complete and all processes are running in a stable manner, it will take extra effort from all employees, “which will be worth it for all of us for the future”. To make up for this, Daniel Minder dedicates his free time to playing football for FC Rorschacherberg. And he also enjoys spending time with his family: “I know it probably sounds strange, but at the moment by family is my real hobby – alongside my job.”
And what’s the situation at the Minder family home? With so much enthusiasm for technology, one could assume that all kinds of technology also play a role in the home? As it happens, a renovation project is currently under way. Daniel Minder has designed the best possible way from “old family home with potential” to a modern, sustainable residence. The solar panels for the hot water have already been installed, and the electrical network has recently been completely refurbished, including the installation of new wiring. And yes – after handling the major construction aspects, he’s sure to introduce a few automated and app-controlled appliances, too.

The Production facility of V-ZUG